This article was originally written for devspotlight

If you’re a team developing and maintaining a software monolith, there’s a good chance you’re considering or planning a move to an architecture based around microservices. I’m won’t go into the various trade-offs involved in that decision in this article; rather, I will focus on one specific technique that might help you make the transition: Change Data Capture (CDC)

It’s relatively straightforward to build a system around microservices if you’re starting from scratch. However, it can be difficult to plan and manage a transition from an existing monolith. The kinds of changes involved can be substantial, and it’s hard to keep a live system running smoothly while you fundamentally change how it works.

It’s a big shift from an ACID-compliant database to a distributed architecture based on eventual consistency, and keeping data consistent during a long migration, when different information is held in different parts of your system can be particularly challenging.

Change Data Capture (CDC) enables you to make minimal changes (if any at all) to your production system at first. Rather, you set up a system to observe your database, and create events whenever key data is changed, with your "new architecture" systems responding to these events.

Let’s look at an example. Say you want to add an onboarding email flow to your application, so that new users receive helpful emails over the course of several days after they create an account. Using CDC, you can create this new flow as a microservice. Whenever a new user record is added to your main users table, a new event is created. Then, your new microservice would consume that event and manage the onboarding process, without requiring any further changes to your main legacy application. Another example would be to send users an exit survey after they deleted their account, to capture data on why your service no longer meets their requirements.

I’m going to walk through one technique for achieving this, which requires literally no changes whatsoever to the "main" application; Heroku’s recently-launched Streaming Data Connectors Beta.

The way this works is that you add a managed Kafka and a "data connector" to your Heroku application, defining the tables and columns where changes should generate events. Then, you can set up other applications to consume events from Kafka topics.

In the rest of this article, I’m going to walk you through how to set this up. We’ll be using a trivial database-backed web application to represent our monolith, and a separate application subscribed to a Kafka topic, which will consume the events we generate by making changes to our database.

> The Streaming Data Connectors Beta is only available to Heroku Enterprise users at the moment, because it only works in a Heroku Private Space (which is an enterprise feature).

Let’s look at some code.

> I’m working on a Mac laptop, but these commands should work fine in any posix-compliant terminal environment.

Some of the commands we’ll be using create resources in your Heroku account which incur charges. Please don’t forget to remove your applications when you’re finished, or you could end up being billed for these services.

You can do this by running make clean in both the sinatra-postgres-demo directory, and the kafka-consumer directory. You can also delete the applications using the Heroku web interface.

To verify that everything has been successfully removed, you can run:

Please use the name of your Heroku private space, in the command above.

We’re going to use a trivial web application that manages "user" records in a postgres database. I’ve written this one in Sinatra, which is a ruby library for lightweight web applications.

The application has a few HTTP endpoints:

This is the implementation of the database code:

The full application is available here. Let’s get it running.

This will create an app. with a random name, so to keep the code samples consistent, I’m going to read the name and store it in an environment variable APP.

We need a database for our app, and in order to use the Streaming Data Connectors Beta you need to use a specific version of the Heroku postgres add-on:

> Please note that running this command will incur charges on your Heroku account.

It can take a few minutes to create the database, so the wait command above will let you know when you can move on to the next step:

This deploys our application, and sets up the database with the users table and a few sample records.

Once this process has completed, you should be able to run heroku open and see a web page that looks like this: 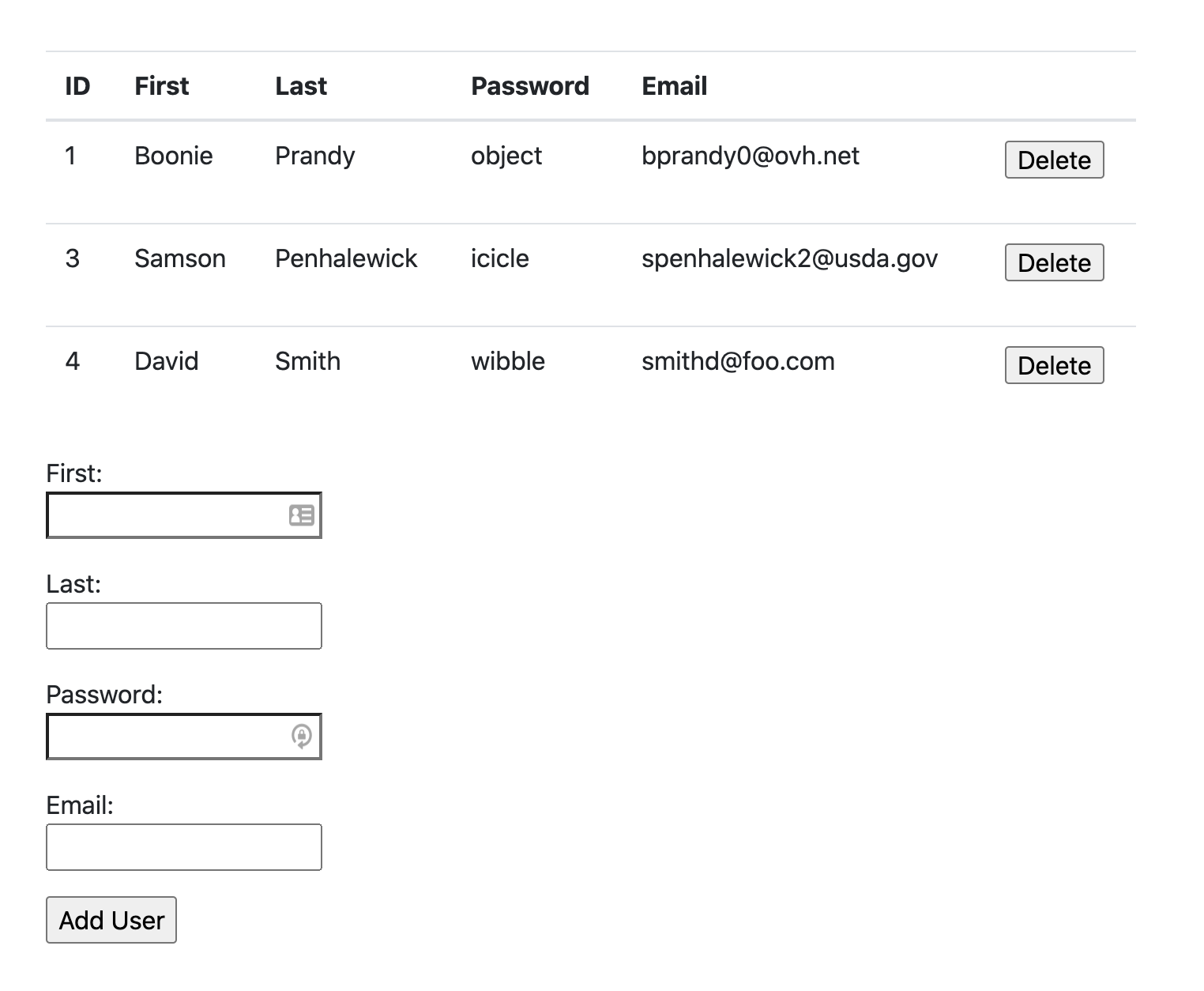 Now we have an example web application, backed by a postgres database, where we can add and remove records from the users table. This represents our monolith application. Now let’s add the Streaming Data Connectors Beta to see how we could use CDC to add microservices without changing our application.

We need Kafka to act as the messaging backbone of our connected applications, so we need the kafka add-on. Again, you need to use a specific version:

> Please note that running this command will incur charges on your Heroku account.

Again, this can take some time.

Once we have our kafka add-on, we can set up the connector to generate kafka events whenever a table in our postgres database changes.

We need to install a plugin to be able to add the database connector:

Once you’ve done that, the syntax to create our database connector looks like this:

To get the postgres identifier, run this command:

You shoud see output that looks like this (your values will be different):

The identifier we need is on the first line. In this case, postgresql-tapered-49814

The process for getting the kafka identifier is similar, with the identifier appearing on the first line of output:

Now that we have identifiers for both the postgres database and the kafka instance, we can create the database connector. I’m using the identifiers from my application, so you’ll need to substitute the appropriate values from yours when you run this command:

I’ve specified the table as public.users. I used the default public schema of my postgres database when I created my users table. If you used a different schema, you’ll need to specify that instead.

Notice also that I’ve used --exclude public.users.password – this means no information about the value of the password field will be included in the kafka events which are generated. This is a very useful feature to ensure you don’t accidentally send sensitive user information from your main application to a microservice which doesn’t need it.

Now we have our original database-backed application, and we’ve added the Streaming Data Connectors Beta, so we should see an event on the kafka service whenever we make a change to our users table.

The next step is to set up another application to consume these events. In a real-world scenario, you would want to do something useful with these events, but for this article all we’re going to do is display the events in a very simple web interface.

I’ve written a very simple "kafka-consumer" application, also using ruby and sinatra, which you can see here. In creating this, I ripped off a bunch of code from was inspired by this heroku-kafka-demo-ruby application.

Let’s get this deployed, and connect it to our kafka instance. Fire up a new terminal session and run these commands (don’t forget to set the HEROKU_PRIVATE_SPACE environment variable):

Before we deploy our application, we need to do some setup to enable this application to read from the kafka topic that was created when we set up the database connector.

To give your new application access to the kafka instance, we need to run a command like this:

The [app with kafka] is the name of your instance of the sinatra-postgres-demo application, which you’ll see if you run heroku apps:info in your other terminal session.

The [app that wants to access kafka] is the instance of kafka-consumer – the application we’re creating now.

In my case, the command I need looks like this (substitute the values for your applications):

> Be careful to put two colons before KAFKA, or you’ll get Couldn't find that add-on.

If you run heroku config you’ll see that our new application now has several KAFKA* environment variables set, which will enable us to connect to the kafka instance.

There is still one more thing we need though – we need to know the kakfa topic on which our events are going to be published. The topic was automatically created when we added the database connector. To find out what it is, go back to your sinatra-postgres-demo directory and run this command:

The topic we want is the one ending with public.users. In my case, that’s witty_connector_44833.public.users If you specified multiple tables when you created the data connector, you’ll see a topic for each of them.

Our demo kafka-consumer application just uses a single topic, which it gets from the KAFKA_TOPIC environment variable. So, we can set that now.

Back in your kafka-consumer terminal session, run this command (substituting your own topic name):

Now we can deploy our application:

As with the sinatra-postgres-demo application, you may have to wait a couple of minutes for the DNS changes to complete.

Now, we have all the pieces in place:

In your browser, use the form to add a new user. A few seconds later, you should see a JSON message appear in the Message List application.

The JSON you can see is the "value" of the kafka event. There is other metadata in the event which you can see by tweaking the kafka-consumer application, but for now let’s just look at the JSON data.

You can use a tool such as jq to inspect the JSON, or paste it into an online JSON tool like this one.

Collapsed down to just the top-level, you can see that the message has a "schema" and a "payload" 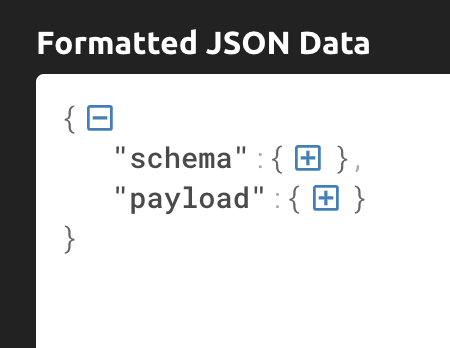 There is a lot of metadata in the "schema" part, but most of the time you’ll probably be more interested in the "payload" which has a "before" and "after" section, which should show you the values of the database record before and after whatever change is being reported. There are some important caveats about "before" in the best practices document about the Streaming Data Connectors Beta. 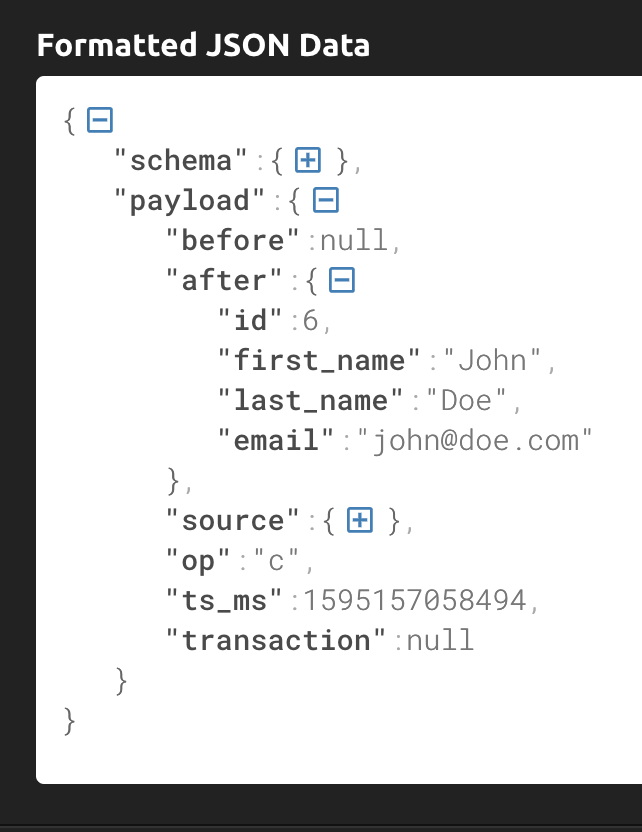 Notice how the "after" section does not include the "password" field of the user record, because we excluded it when we created the data connector.

It’s worth emphasizing that we didn’t have to make any changes at all to our "monolith" application code in order to make this happen.

Don’t forget to remove your applications when you’re finished, or you could end up being billed for these services.

You can do this by running make clean in both the sinatra-postgres-demo directory, and the kafka-consumer directory. Or, you can delete the applications using the Heroku web interface.

To verify that everything has been successfully removed, you can run:

View all posts by digitalronin